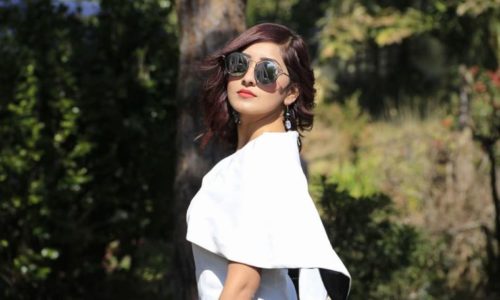 Aanchal Sharma (Dawadi) is a Nepalese actress and model. Sharma participated in beauty pageants before becoming an actress. Aanchal won the title of Miss +2 in 2015. She has worked in a number of movies, music videos, and advertisements.

Aanchal Sharma was born on 18 March 1995 in Kathmandu, Nepal. She is the daughter of Uttam Dawadi and Mira Dawadi. She has one brother Sweckchhik Dawadi and one sister Apekshya Dawadi. She finished her schooling at Kathmandu International School. Currently, she is studying BSW.

She made her acting debut in Nepali cinema with a film directed by Bikash Raj Acharya Nai Nabhannu La 4 with two senior actresses such as Priyanka Karki and Barsha Raut. In 2018, she appeared in Shatru Gate and Johny Gentleman.

Aanchal Sharma worked as VJ in Nepal Television for two years. She is working in NGO, Bridashram, and is also an ambassador of Dhamala Group.

There was a rumor about a relationship with one of her co-actor Paul Shah. But both denied the fact that they are in a relationship.

Actress Aanchal Sharma’s fake pornographic video was leaked online in March 2020.  Rabindra Khadka, the president of the Artists’ Association, called her and encouraged her to fight against the ungrateful act. The artists’ association lodged a complaint against the fake pornography video at the Metropolitan Crime Investigation Division.