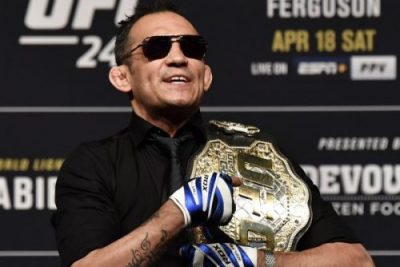 Born on February 12, 1984, Tony Ferguson is an American professional mixed martial artist who competes in the lightweight division of the Ultimate Fighting Championship (UFC). Ferguson has also trained boxing, jiu-jitsu, muay Thai, and wing chun. As of July 30, 2020, he is #15 in the UFC men’s pound-for-pound rankings and #3 in the UFC lightweight rankings.

Ferguson was born in Oxnard, California, and raised mainly in  Muskegon,  Michigan. He is of Mexican heritage. He enrolled at Central Michigan University before transferring to Grand Valley State University but he did not complete his degree, but had a successful collegiate wrestling career, winning the 2006 National Collegiate Wrestling Association national wrestling championship in the 165-lb division.

Ferguson is married to Cristina Ferguson and they have a son, Armand Anthony. For updates, follow him on his Instagram or Twitter or visit our site Celebmezzo.