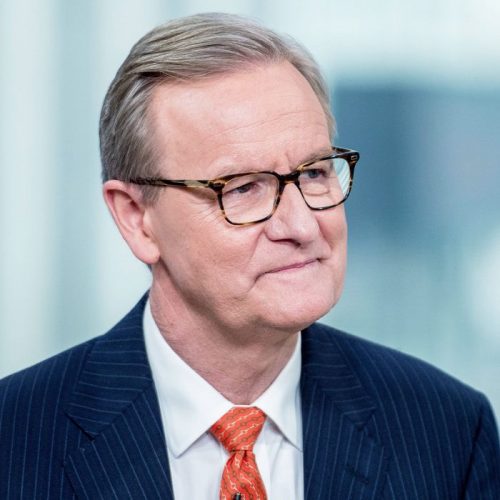 Born on October 19, 1956, Stephen James Doocy is an American television host, political commentator, and author who is most known for his current work as an anchor of Fox & Friends on the Fox News Channel.

He started his television career with reporter jobs at TV stations in Topeka, Des Moines, Wichita, and Kansas City. His first major market assignment was as a features reporter for WRC, in Washington, D.C. In 1990, he was named the host of NBC’s nationally syndicated program House Party with Steve Doocy, a remake of the 1960s Art Linkletter show, which was followed by the syndicated kids’ series Not Just News’’.

Doocy joined the Fox News Channel in 1996 and began co-hosting the network’s morning show Fox & Friends in 1998. Doocy has earned TV reporting and writing awards from the Associated Press, the Society of Professional Journalists (formerly known as Sigma Delta Chi), and 11 Emmy Awards from the National Academy of Television Arts and Sciences.

Doocy was born in Algona, Iowa, the son of JoAnne (née Sharp) and James Edward Doocy, who worked in sales and construction. His paternal grandfather was of Irish descent and his maternal grandmother was of Swedish descent. He was raised in Industry, Kansas, and attended Kansas grade schools in Russell, Salina, and Industry. Doocy went to junior high in Wakefield and high school in Clay Center, Kansas. He graduated from the University of Kansas, in Lawrence, with a BS in journalism.