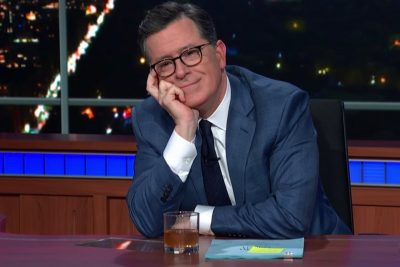 Born on May 13, 1964, Stephen Colbert is an American comedian, television host, and writer who is best known for hosting the satirical  Comedy Central program The Colbert Report from 2005 to 2014 and the CBS talk program The Late Show with Stephen Colbert beginning in September 2015.

Colbert’s work as a correspondent on Comedy Central’s news-parody series The Daily Show gained him wide recognition. The Colbert Report became one of Comedy Central’s highest-rated series, earning Colbert an invitation to perform as featured entertainer at the White House Correspondents’ Association Dinner in 2006. Colbert has won nine  Primetime Emmy Awards, two Grammy Awards, and two Peabody Awards. Colbert was named one of Time‘s 100 Most Influential People in 2006 and 2012.[7][8] Colbert’s book, I Am America (And So Can You!), was listed No. 1 on The New York Times Best Seller list in 2007.

Colbert was born in Washington, D.C., to father James William Colbert Jr. and mother Lorna Elizabeth Colbert. He is the youngest of 11 children in a Catholic family. He spent his early years in Bethesda, Maryland. Colbert and his siblings, in descending order by age, are James III, Edward, Mary, William, Margo, Thomas, Jay, Elizabeth, Paul, Peter, and Stephen. His father was an immunologist and medical school dean at Yale University, Saint Louis University, and finally at the Medical University of South Carolina, where he served as vice president for academic affairs. His mother was a homemaker.

On September 11, 1974, his father and his two brothers Peter and Paul, died in the crash of Eastern Air Lines. Colbert attended Charleston’s  Episcopal  Porter-Gaud School and graduated from Northwestern’s School of Communication in 1986.