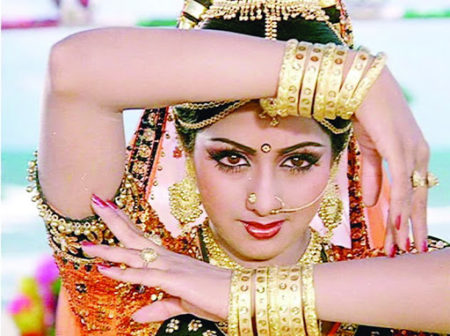 Sridevi Kapoor was an Indian actress and film producer who starred in Tamil, Telugu, Hindi, Malayalam, and Kannada films. Regarded as Hindi cinema’s first female superstar, she was the recipient of two Filmfare Awards and three Filmfare Awards South. Referred to as the “First Female Superstar, Sridevi ranked among the highest-paid actors in the 1980s and 1990s and is considered to be one of the most popular actresses of Indian cinema.

Sridevi was born in Sivakasi, Tamil Nadu, India on 13 August 1963 to Ayyapan and Rajeshwari. Her father was a lawyer and her mother was from Tirupati, Andhra Pradesh. She has a sister and two stepbrothers. Having begun to act when she was just 12, she did not complete formal education or get much of a chance to interact with kids of her own age.  Her father died in 1991, while she was shooting for Lamhe. Her mother died in 1996, as a result of the complications suffered from an operation that she underwent in 1995 on a brain tumor at Memorial Sloan Kettering Cancer Center in New York.  The neurosurgeon operated on the wrong side of her brain destroying her vital tissues of vision and recent memory. Sanjay Ramaswamy is married to her sister Srilatha since 1989.

Sridevi made her debut as child artist with the 1967 Tamil film Kandhan Karunai at the age of 4, and started her acting career in lead role as a child with M. A. Thirumugam’s 1969 mythological Tamil film Thunaivan. She made her Hindi film debut at age 9 with Rani Mera Naam (1972). Sridevi’s first starring role in Hindi cinema came with the 1979 drama film Solva Sawan, and she received wider recognition with the 1983 film Himmatwala. Sridevi returned to film acting in 2012 with the successful comedy-drama English Vinglish, and then starred in her 300th film role in the 2017 thriller Mom. She earned critical acclaim for her performances in both films. Sridevi is cited by media publications as a fashion icon.

At the time of her death, Sridevi was not shooting for any upcoming films; her last on-screen appearance was in Aanand L. Rai’s film Zero (2018) in a cameo.  Sridevi had signed the 2019 film Kalank, produced by Karan Johar; however, due to her demise she was replaced by Madhuri Dixit.

In 2013, the Government of India awarded Sridevi the Padma Shri, the country’s fourth highest civilian accolade for her contributions to the entertainment industry. Honourary awards were also conferred on her by the state governments of Tamil Nadu, Andhra Pradesh and Kerala. She was the recipient of various accolades, including a National Film Award, a Nandi Award, the Tamil Nadu State Film Award, the Kerala State Film Award, three Filmfare Awards and three Filmfare Awards South. She was awarded the National Film Award for Best Actress for the movie Mom.

Was Sridevi single or Married?

Sridevi was extremely discreet about her privacy and rarely gave interviews or discussed her private life in them. In the 1980s she was reported to have married actor Mithun Chakraborty, whom she met on the sets of Jaag Utha Insan (1984).  In 1996, she married producer Boney Kapoor. The couple had two daughters, Janhvi (born in 1997), who is herself an actress, and Khushi (born in 2000). Arjun kapoor is the step-son from the first wife of Boney Kapoor.

How rich was Sridevi ?

Sridevi Kapoor’s net worth was estimated to be around $35 million, combined with her husband’s net worth.

On 20 February 2018, Sridevi and her youngest daughter Khushi had flown to United Arab Emirates, to attend the wedding of her nephew Mohit Marwah. Her daughter returned back to India but she stayed there for shopping. Boney Kapoor went to Dubai on 4 February 2018 andShe and Kapoor briefly met and chatted for half an-hour or so. Afterwards they decided to have dinner. Sridevi went to bathe and to get dressed for dinner, while Kapoor waited in a living room. After 15–20 minutes, around 19:00, he called out to the actress as they were getting late but was unable to get a response.

Sridevi was pronounced dead on 24 February 2018  in her hotel room where her husband had found her. At first, it was announced by her brother in-law Sanjay Kapoor to the Indian media that the cause of death was a cardiac arrest, but the General Department of Forensic Evidence, Dubai revealed that the cause of death was “accidental drowning”. The toxicology report later also revealed that traces of alcohol were found in her body, and water was found in her lungs.

On 27 February, her body was flown back to Mumbai, India.  Her funeral took place on 28 February, at the Vile Parle Seva Samaj Crematorium in Mumbai. The final rites were performed by her husband Boney Kapoor. Sridevi was cremated with state honours and also received a gun salute at her funeral. Her pyre was lit by her husband.[On 3 March, Sridevi’s ashes were flown into Tamil Nadu via Chennai by her husband and her two daughters Jhanvi and Khushi and later taken to and immersed in the sea off the coast of Rameshwaram.