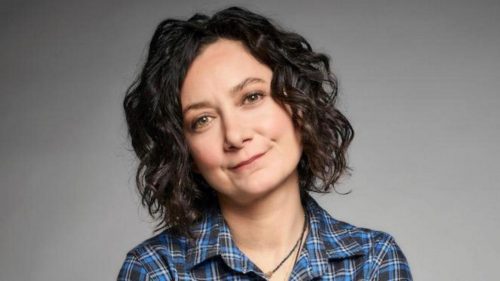 Born on January 29, 1975, Sara Gilbert is an American actress, director, and producer who is best known for her role as Darlene Conner on the ABC sitcom Roseanne (1988–1997; 2018), for which she received two Primetime Emmy Award nominations. She is also the creator and former co-host of the CBS daytime talk show The Talk and had a recurring role as Leslie Winkle on CBS’s The Big Bang Theory.

Sara Rebecca Abeles was born in Santa Monica, California, the daughter of Barbara Cowan and Harold Abeles. Both her parents are Jewish. She has four older half-siblings. Her two siblings on her mother’s side, Melissa Gilbert and  Jonathan Gilbert were stars of Little House on the Prairie. Gilbert also has two siblings on her father’s side, sister Patrice and brother Joseph. She graduated from Yale University in 1997, with honors, majoring in art with an emphasis on photography.

As a teenager, Gilbert dated her co-star Johnny Galecki. During their relationship, she realized she was a lesbian. She remains close friends with Galecki.

In 2001, Gilbert began a relationship with television producer Ali Adler. They have two children—a son, Levi Hank, born to Adler in October 2004, and a daughter, Sawyer Jane, born to Gilbert in August 2007. In August 2011, Gilbert announced that she and Adler had separated amicably.

Following the breakup, Gilbert began a relationship with songwriter, music producer, and former 4 Non-Blondes frontwoman Linda Perry. Gilbert announced their engagement in April 2013, and the pair married on March 30, 2014. Gilbert gave birth to their son, Rhodes Emilio Gilbert Perry, on February 28, 2015. On December 27, 2019, Gilbert filed for legal separation from Perry.

Is Sara Gilbert a lesbian?

For many years, Gilbert remained private about her sexuality, choosing not to publicly discuss her personal life. In July 2010, as she prepared to launch her talk show, The Talk, Gilbert confirmed that she was a lesbian.