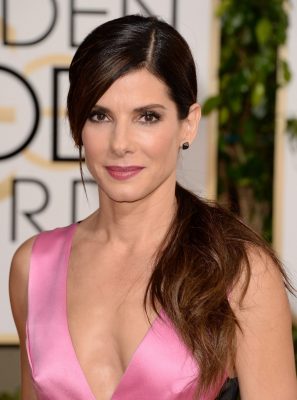 She received various awards including an Academy Award, a Golden Globe Award, two Screen Actors Guild Awards, and three Critics’ Choice Movie Awards, she was the world’s highest-paid actress in both 2010 and 2014. She was included in Time‘s 100 most influential people in the world in 2010 and was named People’s Most Beautiful Woman in 2015. For her portrayal of Leigh Anne Tuohy in the biographical drama The Blind Side (2009), Bullock won the Academy Award for Best Actress. She was nominated for the same award for playing an astronaut stranded in space in the science fiction thriller Gravity (2013), which ranks as her highest-grossing live-action film to date.

Bullock is the founder of the production company Fortis Films and has produced some of the films in which she has starred, including Miss Congeniality 2: Armed and Fabulous (2005) and All About Steve (2009).

Sandra Annette Bullock was born in Washington, D.C., the daughter of Helga Mathilde Meyer, an opera singer and voice teacher from Germany, and John Wilson Bullock, an Army employee and part-time voice coach from Birmingham, Alabama. She has a younger sister, Gesine Bullock-Prado, who served as president of Bullock’s production company Fortis Films. Bullock attended Washington-Lee High School and graduating in 1982, she attended East Carolina University (ECU) in Greenville, North Carolina, where she received a BFA in Drama in 1987.

Bullock was once engaged to actor Tate Donovan, whom she met while filming Love Potion No. 9. Their relationship lasted three years. She previously dated football player Troy Aikman and actors Matthew McConaughey and Ryan Gosling.

Bullock married motorcycle builder and Monster Garage host Jesse James on July 16, 2005.  In November 2009, Bullock and James entered into a custody battle with James’ second ex-wife, former adult film actress Janine Lindemulder, with whom James had a child. Bullock and James subsequently won full legal custody of James’ five-year-old daughter. Their divorce was finalized on June 28, 2010, with “conflict of personalities” cited as the reason.

She is living with her partner Bryan Randall since 2015.