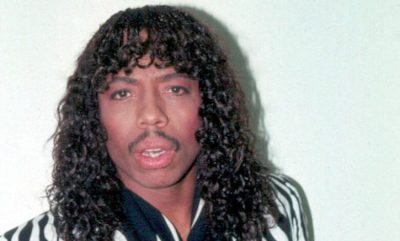 Who is Rick James?

Born on February 1, 1948, James Ambrose Johnson Jr., better known by his stage name Rick James, was an American singer-songwriter, multi-instrumentalist, and record producer. After forming the locally popular Stone City Band in his hometown of Buffalo in 1977, James finally found success as a recording artist after signing with Motown’s Gordy Records, releasing the album Come Get It! in 1978 which produced the hits “You & I” and “Mary Jane”. In 1981, James released his most successful album, Street Songs, which included career-defining hits such as “Give It to Me Baby” and “Super Freak”, the latter song becoming his biggest crossover single, mixing elements of funk, disco, rock, and new wave. James was also known for his soulful ballads such as “Fire & Desire” and “Ebony Eyes”. In addition, James also had a successful career as a songwriter and producer for other artists including Teena Marie, the Mary Jane Girls, The Temptations, Eddie Murphy, and Smokey Robinson.

Rapper MC Hammer sampled James’ “Super Freak” for his 1990 hit, “U Can’t Touch This” which won Best R&B Song at the 1991 Grammy Awards. James received his only Grammy for composing the song.

Johnson was in Buffalo, New York, to Mabel and James Ambrose Johnson Sr. He was one of eight children. James’ father, an autoworker, left the family when James was 10. His mother was a dancer for Katherine Dunham and later worked as a numbers-runner to earn a living. He attended Orchard Park High School and Bennett High School prior to dropping out.

James had two children with Syville Morgan, a former singer, and songwriter. They had a daughter, Tyenza, and a son, Rick Jr. He dated actress Linda Blair from 1982 to 1984.

In 1989, James met 17-year-old party-goer Tanya Hijazi. The two began a romance in 1990. In 1993, the couple had their only child and James’s youngest, Tazman. Following their respective releases from prison for assaulting Mary Sauger and Frances Alley, they married in 1996 and divorced in 2002.

James was very close with Teena Marie, whom he met and began collaborating within 1979. Teena Marie stated they were engaged “for two weeks.”

James’ drug abuse began in his teens, first with marijuana and heroin. He began using cocaine in the late 1960s. His cocaine addiction increased by the 1980s, and he began freebasing by the end of the decade. His drug use led to major health problems. In April 1984, he was hospitalized after being found unconscious in the middle of his house by a friend. In 1998, James suffered a stroke after a blood vessel ruptured in his neck during a concert at Mile High Stadium in Denver.

On August 2, 1991, James and his girlfriend, Tanya Hijazi was arrested on charges of holding 24-year-old Frances Alley hostage for up to six days, tying her up, forcing her to perform sexual acts, and burning her legs and abdomen with the hot end of a crack cocaine pipe during a week-long cocaine binge. James faced a maximum sentence of life in prison if convicted on all charges, which included assault with a deadly weapon, aggravated mayhem, torture, forcible oral copulation, false imprisonment, and kidnapping.

In 1998, James was accused of sexually assaulting a 26-year-old woman, but the charges were later dropped. In 2020, James’ estate was sued for $50 million by a woman who accused him of raping her when she was 15 years old at a group home for troubled youths in Buffalo, New York in 1979.

On the morning of August 6, 2004, James’ caretaker found him dead in his Los Angeles home at the Oakwood Toluca Hills apartment complex, just outside Burbank. James died from pulmonary failure and cardiac failure, associated with his various health conditions of diabetes, a stroke, pacemaker, and heart attack. His autopsy found alprazolam,  diazepam, bupropion, citalopram, hydrocodone, digoxin, chlorpheniramine, methamphetamine, and cocaine in his blood. However, the coroner stated that “none of the drugs or drug combinations were found to be at levels that were life-threatening in and of themselves”.