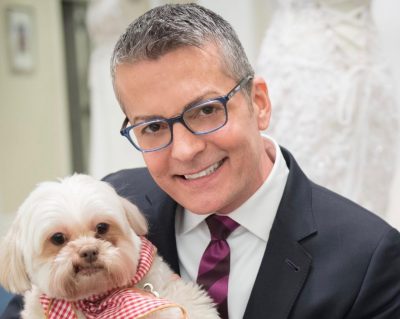 Who is Randy Fenoli?

Born on January 30, 1964, Randy Fenoli is an American television presenter and fashion designer who is mainly known for his work on Wedding Dresses and his own TV Show Randy’s Wedding Rescue and Say Yes to the Dress. Fenoli was the Fashion Director for the wedding dress store Kleinfeld Bridal from 2007 to 2012.

After winning the Miss Gay America competition in 1990, performing as Brandi Alexander, he used the prize money to enroll at New York’s Fashion Institute of Technology. He was offered a job working for Vivian Dessy Diamond, of the Vivian Diamond company. Subsequently, his design experience paid off when he was offered a job at Kleinfeld. He is now an independent consultant.

Born in Mt. Vernon, Illinois, Fenoli grew up with a love of fashion and began sewing dresses when he was only nine years old, eventually expanding his efforts into the areas of make-up artistry, hair styling, and entertainment. He has six siblings and he is the youngest among them. He was raised by his mother, Jeanette Fenoli.

It is still a mystery that Randy is married or not. There were rumors that he was married to American actress and singer Liza Minnelli for 7 years. Later, Randy said in an interview that he was never married, and the married rumors were just fake. For more updates, follow him on Instagram & Facebook.