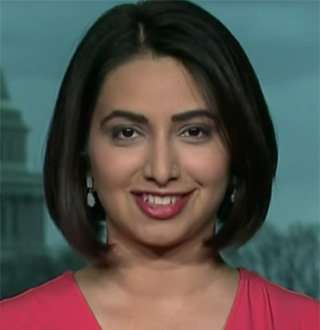 Born on 1st October 1981, Nayyera Haq is an American radio talk show host, advisor, humanitarian, commenter as well as CEO, and speaker. She worked in several Government posts before she earned fame as a White House senior director. She started her career as a Media Advisor to Democrat leader Nancy Pelosi. After years of service and experience, she earned a prestigious job as the Senior Director of Cabinet Affairs in the White House.

Nayyera was born to Pakistani immigrant parents, who were a public-school teacher and a physician. She is from a mixed ethnical background and her nationality is American. She had her early education from Stuyvesant High School and later got enrolled in the University of Michigan where she studied history. As a quite ambitious person, Nayyera continued her study after graduation and received a Master’s Degree in Law and Journalism from Georgetown University Law Centre, 2008.

Nayyera is a married woman. Her husband works as a veterinarian, however, she is yet to reveal her husband’s identity. They welcomed the baby boy, Idris in November 2016.