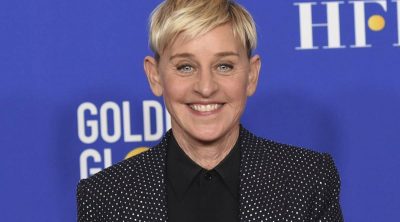 Who is Ellen DeGeneres?

Born on January 26, 1958, Ellen DeGeneres  is an American comedian, television host, actress, writer, and producer. She starred in the sitcom Ellen from 1994 to 1998 and has hosted her syndicated television talk show, The Ellen DeGeneres Show, since 2003.

Her stand-up career started in the early 1980s and included a 1986 appearance on The Tonight Show Starring Johnny Carson. As a film actress, DeGeneres starred in Mr. Wrong (1996), EDtv (1999), and The Love Letter (1999), and provided the voice of Dory in the Pixar animated films Finding Nemo (2003) and Finding Dory (2016); for Nemo, she was awarded the Saturn Award for Best Supporting Actress, the first time an actress won a Saturn Award for a voice performance. In 2010, she served as a judge on the ninth season of American Idol.

DeGeneres has hosted the Academy Awards, Grammy Awards, and the Primetime Emmys. She has authored four books and started her own record company, Eleveneleven, as well as a production company, A Very Good Production. She also launched a lifestyle brand, ED Ellen DeGeneres, which comprises a collection of apparel, accessories, home, baby, and pet items. She has won 30 Emmys, 20 People’s Choice Awards, and numerous other awards for her work and charitable efforts. In 2016, she received the Presidential Medal of Freedom. In January 2020, DeGeneres received the Carol Burnett Award at the Golden Globes for her work on television, becoming the first recipient after its inaugural namesake Carol Burnett.

DeGeneres was born and raised in Metairie, Louisiana, to Elizabeth Jane, a speech therapist, and Elliott Everett DeGeneres, an insurance agent. She has one brother, Vance DeGeneres, a musician and producer. She was raised a Christian Scientist. She graduated from Atlanta High School and attended attend the University of New Orleans, where she majored in communication studies. After one semester, she left school to do clerical work in a law firm with a cousin, Laura Gillen.

In 1997, DeGeneres came out as a lesbian. The same year she came out, DeGeneres started a romantic relationship with actress Anne Heche that lasted until August 2000. From 2000 to 2004, DeGeneres maintained a close affair with photographer Alexandra Hedison.

Since 2004, DeGeneres has had a relationship with Portia de Rossi. DeGeneres and de Rossi were engaged, and married in August 2008