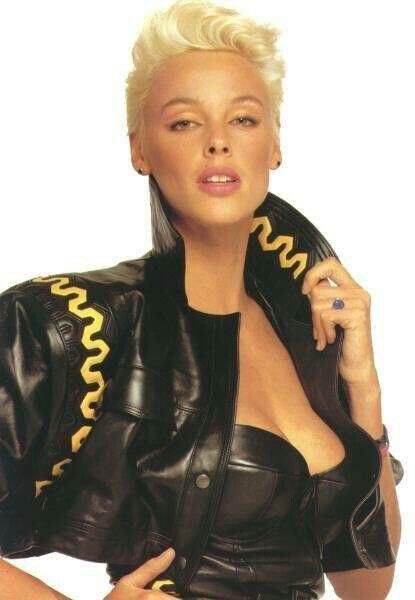 Born on 15 July 1963, Brigitte Nielsen is a Danish actress, model, singer and reality television personality who rose to fame for her marriage to  Sylvester Stallone, with whom she starred in the 1986 film Cobra. She began her career modeling for Greg Gorman and Helmut Newton and acted in the 1985 films Red Sonja and Rocky IV, later returning to the  Rocky  series  in  Creed II (2018). She later built a career starring in B-movies, hosting TV shows, and appearing on reality shows.

Nielsen was born in Copenhagen, Denmark. She is the daughter of Hanne, a librarian, and Svend Nielsen, an engineer. Nielsen did some modeling work, and was photographed by Greg Gorman and Helmut Newton. She posed for Playboy magazine multiple times, garnering the cover in December 1987 and she began her acting career in the fantasy film Red Sonja alongside Arnold Schwarzenegger.

Nielsen has been married five times and has four sons and one daughter. Her first husband was Kasper Winding, to whom she was married in 1983–84, and they have one son, Julian Winding. She married actor Sylvester Stallone on December 15, 1985 and their marriage lasted 19 months, with their divorce finalized in July 1987. They had no children. Her second child, Killian Marcus Gastineau (born in 1989), was fathered by her ex-fiancé  Mark Gastineau. Between 1990 and 1992. She was married to director and photographer Sebastian Copeland. They had no children. Nielsen has two sons with fourth husband Raoul Meyer, Douglas Aaron (born in April 1993) and Raoul, Jr. (born in May 1995). In 2005, she had a highly publicized relationship with rapper Flavor Flav.

She is currently living with her current husband Mattia Dessì. The couple got married in Malta on July 8, 2006 and have a daughter, Frida.

As of 2020, Brigitte is 57 years old and has net worth of $100 million. For more updates, visit back our website Celebmezzo.