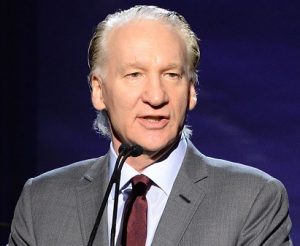 Born on January 20, 1956, Bill Maher is an American comedian, political commentator, and television host who is known for the HBO political talk show Real Time with Bill Maher (2003–present) and the similar late-night show called Politically Incorrect (1993–2002), originally on Comedy Central and later on ABC. He is known for his political satire and sociopolitical commentary. He is a supporter of animal rights, having served on the board of PETA since 1997 and is an advisory board member of Project Reason.

He ranked at number 38 on Comedy Central’s 100 greatest stand-up comedians of all time in 2005 and He received a Hollywood Walk of Fame star on September 14, 2010. Similarly, he won a Primetime Emmy Award for his work as executive producer for Vice in 2014.

Maher was born and raised in his Irish-American father’s Roman Catholic religion in New York City. His father, William Aloysius Maher Jr., was a network news editor and radio announcer, while his mother Julie Maher was a nurse. He has a sister. He graduated from Pascack Hills High School in Montvale in 1974. He then attended Cornell University, where he double-majored in English and history, and graduated in 1978.

As of 2020, Maher is 64 years old and has a net worth of $150 million. For more updates, follow him on Twitter or Instagram or visit our site Celebmezzo.