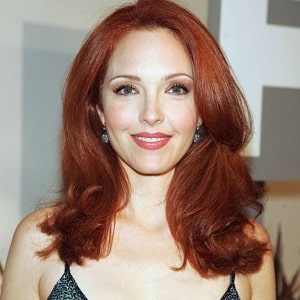 Born on September 12, 1962, Amy Marie Yasbeck (is an American actress who is best known for her role as Casey Chappel Davenport on the sitcom Wings from 1994 to 1997, and for having played the mermaid Madison in the television film Splash, Too in 1988 (the role originated by Daryl Hannah in the film Splash). She has guest-starred in several television shows and appeared in the films House II: The Second Story, Pretty Woman, Problem Child, Problem Child 2, The Mask, Robin Hood: Men in Tights, and Dracula: Dead and Loving It.

Yasbeck was born in Ohio, the daughter of Dorothy Louise Mary, a homemaker, and John Anthony Yasbeck, a butcher and grocery store owner.  Her father was of Lebanese descent, while her mother was of Irish ancestry. She spent her primary and secondary years at two different Catholic schools: Summit Country Day School and Ursuline Academy. After losing both of her parents, her father from a heart attack, and her mother from emphysema, Yasbeck moved to New York City.

Amy married John Ritter in 1999. The couple had a daughter, Stella. On September 11, 2003, Ritter fell into a coma when rehearsing for 8 Simple Rules for Dating My Teenage Daughter. He was taken to the hospital by paramedics. Initially, Ritter was thought to be suffering a heart attack. At 10:48 that night, Ritter died. The cause of death was actually an aortic dissection stemming from a previously undiagnosed congenital heart defect.

After her husband John Ritter died, Yasbeck filed a $67 million wrongful death lawsuit against Providence Saint Joseph Medical Center and several doctors who treated him, alleging they misdiagnosed his condition and that contributed to his death. Several of the defendants settled out of court for a total of $14 million, including Providence St. Joseph, which settled for $9.4 million. On March 14, 2008, a jury split 9–3 in favor of the doctors, clearing the physicians of any wrongdoing.