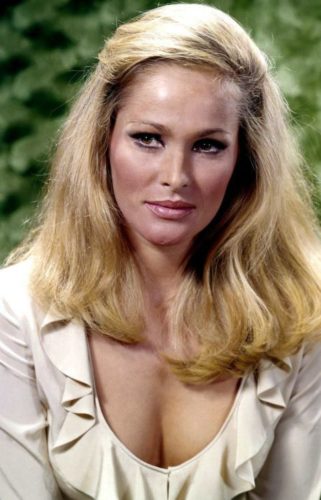 Who is  Ursula Andress ?

Ursula Andress is a Swiss film and television actress, former model and sex symbol, who has appeared in American, British and Italian films. She is best known for her breakthrough role as Bond girl Honey Ryder in the first James Bond film, Dr. No. She later starred as Vesper Lynd in the Bond-parody Casino Royale. Her other films include Fun in Acapulco, She, The Blue Max, Perfect Friday, The Sensuous Nurse, Slave of the Cannibal God, The Fifth Musketeer and Clash of the Titans.

Andress, the third of six children, was born on 19 March, 1936, Ostermundigen, Canton of Bern, Switzerland to a German couple, Anna, a landscape gardener, and Rolf Andress, a German diplomat who was expelled from Switzerland for political reasons. He disappeared during World War II. She has a brother and four sisters. She went to school in Bern until she was 16 and speaks several languages including French, German and Italian. She studied art in Paris for a year, then went to Rome, where she did jobs such as nannying children.

Andress was at a party when she met a producer who offered her a screen test for a role in an Italian film. She was successful and appeared in The Sins of Casanova (1955). Andress arrived in Hollywood in January 1955. In March she was signed to a seven-year contract with Paramount Pictures starting at $287 a week. The contract resulted in no acting roles due to her inability to learn English at the time.

Andress returned to screens in 1962 in an episode of Thriller, “La Strega” (1962) with Alejandro Rey. She soon became internationally famous as Honey Ryder, a shell diver and James Bond‘s woman of desire in Dr. No (1962), the first Bond film. Andress won the Golden Globe Award for New Star of the Year in 1964 for her appearance in the film.

Andress dated film icon James Dean shortly before his death in 1955. That same year, she began an affair with actor/director John Derek, a married father-of-twochildren. They wed in 1957 in Las Vegas, but separated in 1963 and divorced in 1966.

She had romantic relationships with Jean-Paul Belmondo, Ryan O’Neal and Fabio Testi.

She was in a relationship with American actor Harry Hamlin after meeting on the set of Clash of the Titans in 1979. She gave birth to their son, Dimitri Hamlin, on 19 May 1980. After she gave birth to a son at age 44, she moved into close friend Linda Evans’ Coldwater Canyon home until hers was ready.  Although an engagement was announced, the couple never married. In 1983, Hamlin broke up with her.

As of 2019, Andress splits her time between her homes in Rome and Switzerland.

How rich is Ursula Andress ?

Ursula Andress is a Swiss-American actress and sex symbol who has a net worth of $25 million.

Does Ursula Andress have breast implants?