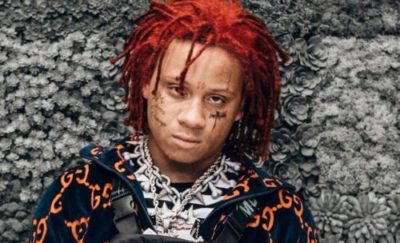 Born on June 18, 1999, Michael Lamar White IV, known professionally as Trippie Redd, is an American rapper, singer, and songwriter who became famous for his debut mixtape A Love Letter to You (2017) and its lead single “Love Scars“. His single “Dark Knight Dummo” reached the Billboard Hot 100. His debut studio album Life’s a Trip (2018) and second album! (2019) both reached the top five of the Billboard 200, while his fourth mixtape A Love Letter to You 4 (2019) topped the chart.

Following XXXTentacion‘s death on June 18, 2018, White dyed his hair in memory of the artist and released “Ghost Busters“, a collaboration with Quavo, XXXTentacion, and Ski Mask the Slump God in memoriam.

He was born in  Canton, Ohio to father, Michael Lamar White III, and mother, Tonya White. His father was in jail at the time of his birth and raised by his mother as a single parent. He has a younger brother nicknamed “Hippie Redd” and had an older brother who made music under the name “Dirty Redd”. Dirty Redd was killed in a car accident in 2014, White talked to Rolling Stone about the time following the fatal accident.

His interest in music began when his mother played Ashanti, Beyoncé, Tupac, and Nas while White was growing up. Following his high school graduation, White moved to Atlanta, where he met rapper Lil Wop and was eventually offered a deal with a record label. White was featured on English YouTuber, media personality, and rapper KSI’s single “Wake Up Call”, which was released in January 2020. The song reached number 11 on the UK Singles Chart. On June 12, 2020, Trippie Redd announced his upcoming album titled Dreamer will be released on June 18, 2020.

Trippie has had an on-off relationship with Ayleks. In 2019, he began dating rapper Coi Leray, but the couple later broke up. Redd and his ex-girlfriend Ayleks are back together and they are dating now.