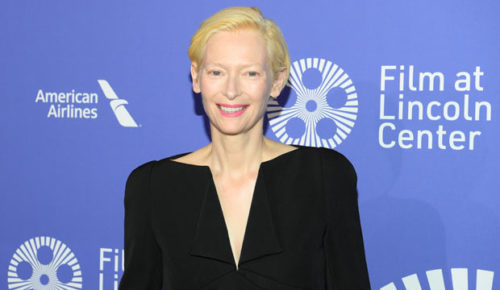 Katherine Matilda “Tilda” Swinton is a British actress, performance artist, model, and fashion muse, known for her roles in independent and Hollywood films. She is the recipient of two BAFTA Awards, one BIFA Award, an Academy Award for Best Supporting Actress and has received three nominations for a Golden Globe Award.

Katherine Matilda Swinton was born on 5 November 1960 in London, the daughter of Judith Balfour and Sir John Swinton, the Laird of Kimmerghame House. She has three brothers. Her father was a retired major general in the British Army, and was Lord Lieutenant of Berwickshire from 1989 to 2000. Her mother was Australian. Swinton attended three independent schools: Queen’s Gate School in London, the West Heath Girls’ School, and also Fettes College for a brief period. West Heath was an expensive boarding school, where she was a classmate and friend of Lady Diana Spencer. In 1983, Swinton graduated from New Hall at the University of Cambridge with a degree in Social and Political Sciences.

Swinton joined the Royal Shakespeare Company in 1984, appearing in Measure for Measure. She also worked with the Traverse Theatre in Edinburgh, starring in Mann ist Mann by Manfred Karge in 1987.

Swinton and her former partner John Byrne, a Scottish artist and playwright, have two children, twins Honor and Xavier Swinton Byrne, born in 1997. She has lived in Scotland for over two decades, currently in Nairn, overlooking the Moray Firth in the Highland region of Scotland, with her children and partner Sandro Kopp, a German painter.