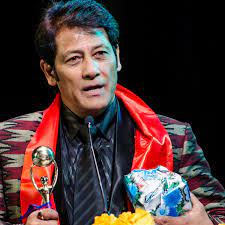 Born on September 18, 1954, Shiva Sundar Shrestha, known professionally as Shiva Shrestha, is a Nepali actor known for action films. He is referred to as the “Action King” of Nepali film. In 2016, he appeared alongside Rajesh Hamal in Bagmati. In 2018, he announced a film that he would write and produce, and would star his son in his debut role. Shrestha was set to feature in a prominent role himself. He was considered the most successful film star in the history of the Nepali film industry. He starred in several box office successful movies like Jeevan Rekha(1980), Badalindo Akash (1982), Kanchi (1984), Bishwas (1986), Chino (1989), ManaKamana(1990), Milan (1993), Dharma Sankat (1998) & Thul Dai (1999) and more.

During the 1980s, 1990s, and 2000s, he was called the second pillar of the film industry with many hits. Apart from action, he is good at dancing and romance. He has worked in some Pakistani movies and had awarded various awards.

Shiva was born and raised in Biratnagar, Nepal. His parent’s information is not available right now.

Shiva married Srijana Shrestha and has a son, Shakti Shrestha, and a daughter, Shona Shrestha.