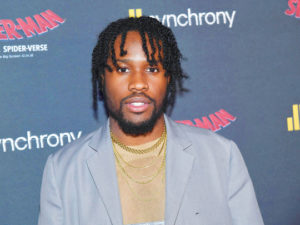 Born on May 4, 1995, Shameik Alti Moore is an American actor, singer, dancer, and rapper who is best known for his first main television role on the sketch-comedy series Incredible Crew, which aired on Cartoon Network. He also gained recognition from the film Dope. He is also one of the five male leads in the Netflix series The Get Down.

Moore voiced Miles Morales in the animated film Spider-Man: Into the Spider-Verse from Sony Pictures Animation, which was released in December 2018.

Moore was born in Atlanta, Georgia to father, Errol, who was a professional musician and mother Sharon. He attended Druid Hills High School. His family originates from Jamaica.

Actor Shameik Moore is currently single, according to our records.

Fact / Trivia you did not know