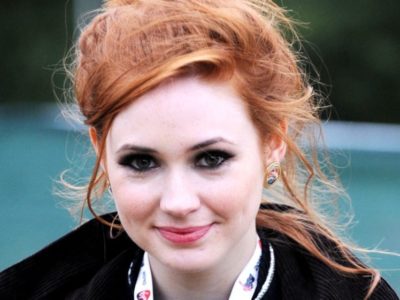 Karen Sheila Gillan is a Scottish actress and director who is known for the role of Amy Pond, companion to the Eleventh Doctor, in the BBC science fiction series Doctor Who (2010–13). In film, she has starred as Jane Lockhart in Not Another Happy Ending (2013), Kaylie Russell in the horror film Oculus (2013), and Nebula in the Marvel film Guardians of the Galaxy (2014) and its sequel Guardians of the Galaxy Vol. 2 (2017). She took part in the upcoming films Jumanji: Welcome to the Jungle, The Circle(2017), Avengers: Infinity War (2018) and its untitled sequel (2019). In 2017, she directed her first feature film The Party’s Just Beginning.

Karen Sheila Gillan was born in Inverness on 28 November 1987, the daughter of Marie and Raymond Gillan. When she turned 16, she moved to Edinburgh and completed an HNC Acting and Performance course at Telford College. She moved to London at age 18 to study at the Italia Conti Academy of Theatre Arts. While there, she was scouted by a modeling agency. Prior to her acting career, she worked as a model, premiering at London Fashion Week in 2007.

Gillan’s early television acting career included guest appearances on several television shows, with her first role being in an episode of ITV crime drama Rebus, a role for which she had to drop out of school. After making an appearance in Outcast, it was announced that Gillan would star in an indie Scottish romantic comedy called Not Another Happy Ending  alongside Emun Elliott in August 2011.

As of 2020, Karen Gillan’s is not dating anyone. According to reports, Karen Gillan had at least 3 relationship previously. She has not been previously engaged.