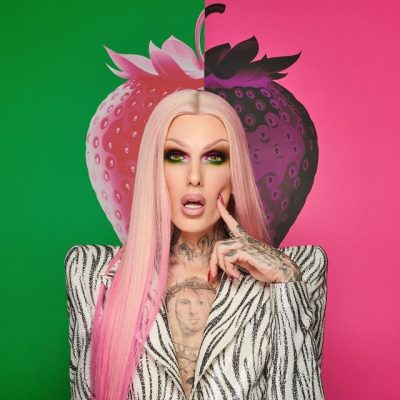 Born on November 15, 1985, Jeffree Star is an American entrepreneur, singer, DJ, Fashion Designer, and the founder and owner of Jeffree Star Cosmetics who released his first and only studio album, Beauty Killer, which included songs such as “Lollipop Luxury” featuring Nicki Minaj. He earned $18 million from his YouTube and became a fifth-highest-paid YouTube star as of December 2018. He has 17.5M subscribers on Youtube. He has worked with Davey Havok of the band AFI.

Star was born in Los Angeles and raised in Orange County, California to father Jeffrey Lynn Steininger Sr. and mother Marra Shubyann Lindstrom Steininger. His father committed suicide when he was six years old and was raised merely by his mother. He moved to Los Angeles following his graduation from high school, supporting himself with various makeup, modeling, and music jobs.

Jeffree is unmarried and was in a relationship with popular Instagrammer Nathan Schwandt from 2015 to 2020. Visit back to our site Celebmezzo for more updates.

Jeffree Star is gay ans has a boyfriend.

Trivia / Facts that you must know