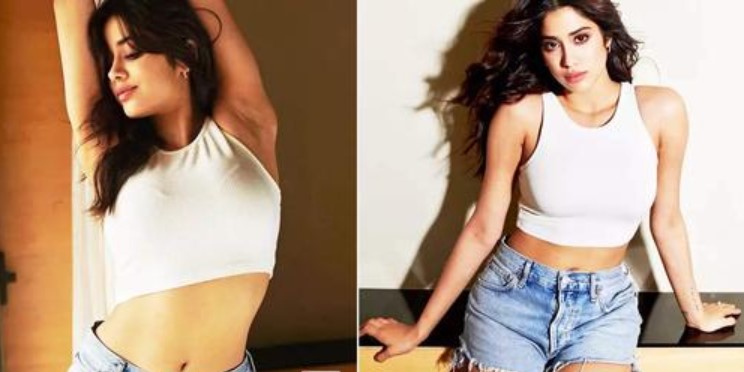 Bollywood actress Janhvi Kapoor treated her fans with gorgeous pictures in a crop top and denim shorts on social media. Taking to her Instagram handle, the ‘Dhadak’ actor shared a series of pictures. Sharing the pictures, she wrote, “undone.” She was seen wearing a white crop top that she teamed up with distressed blue denim shorts. In the first two pictures, she struck a stunning pose as she looked away from the camera. In the next two pictures, Janhvi looked gorgeous with open tresses which complemented her look. She opted for a subtle makeup look with pink lipstick.

In the next images, the 25-year-old diva flaunted her washboard abs as she posed while holding curtains behind her. As soon as the pictures were posted, the actor’s fans and friends chimed into the comment section. Recently, Janhvi collaborated with her BFF actor Sara Ali Khan for a video. Ahead of the much-awaited premiere of the HBO series, ‘House of the Dragon’ on Disney+ Hotstar, new BFFs in B-town shared their excitement to watch the series. On the work front, Janhvi Kapoor, who recently enjoyed good reviews for her OTT movie ‘Goodluck Jerry’, now she is shooting for her next film ‘Mr and Mrs Mahi’. ‘Mr and Mrs Mahi’ also stars Rajkummar Rao in a key role. The film is set against the backdrop of cricket. Directed by Sharan Sharma, it is backed by Karan Johar.