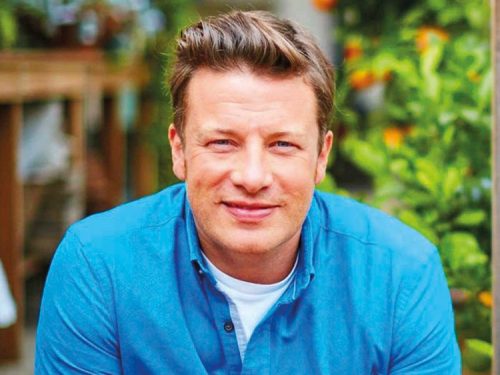 Born on  27 May 1975, Jamie Oliver is a British chef, restaurateur, and cookbook author who is best known for his casual approach to cuisine, which has led him to front numerous television shows and open many restaurants.

in 1999 the BBC aired his television show The Naked Chef. This was followed by a first cookbook, which became a No. 1 UK bestseller. His television work included a documentary, Jamie’s Kitchen, which gained him an invitation from Prime Minister Tony Blair to visit 10 Downing Street.

In 2005, he opened a campaign, Feed Me Better, to introduce schoolchildren to healthier foods, which was later backed by the government. He was the owner of a restaurant chain, Jamie Oliver Restaurant Group, which opened its first restaurant, Jamie’s Italian, in Oxford in 2008. The chain went into administration in May 2019.

His TED Talk won him the 2010 TED Prize. In June 2003, Oliver was made a Member of the Order of the British Empire for “services to the hospitality industry”.

Oliver was born and raised in the village of Clavering in Essex. His parents, Trevor and Sally Oliver ran a pub/restaurant, The Cricketers, where he practiced cooking in the kitchen with his parents. He has one sibling, sister Anne-Marie and was educated at Newport Free Grammar School.

He left school at the age of sixteen with two GCSE qualifications in Art and Geology and went on to attend Westminster Technical College now Westminster Kingsway College. He then earned a City & GuildsNational Vocational Qualification (NVQ) in home economics.

In 2005, Oliver was widely criticized by animal rights groups for slaughtering a lamb on his TV show without first stunning it, with PETA stating that it showed to the public problems with the methods used within slaughterhouses. PETA spokesman Sean Gifford said that it was hoped the footage “could turn the more die-hard carnivore into a vegetarian”. British TV regulator Ofcom reported seven complaints from the public.

Oliver and Gordon Ramsay are spokespeople for the “Big Fish Fight”, which campaigns for sustainable seafood, but were criticized for their use of endangered fish.

Oliver was criticized for underestimating the cost of supposedly cheap food he encouraged poor people to prepare for themselves, also for an unrealistic view of poverty in Britain and around the Mediterranean.