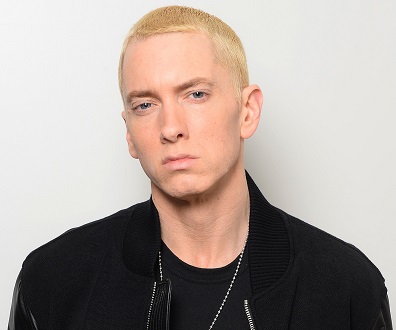 Marshall Bruce Mathers III, known professionally as Eminem, is an American rapper, songwriter, and record producer. He born October 17, 1972 in St. Joseph, Missouri, the only child of Marshall Bruce Mathers Jr. and Deborah Rae “Debbie”. He is of  English, Scottish, German, German Swiss, Polish and Luxembourgian ancestry.  His mother nearly died during her 73-hour labor with him. Debbie later had son Nathan “Nate” Kane Samara. During his childhood, Eminem and his mother shuttled between Michigan and Missouri, rarely staying in one house for more than a year or two and living primarily with family members. In Missouri, they lived in several places.

Eminem spent much of his youth in a working-class, primarily black, Detroit neighborhood. Eminem was beaten by black youths several times.  As a child he was interested in storytelling, aspiring to be a comic-book artist before discovering hip hop.  Eminem heard his first rap song (“Reckless”, featuring Ice-T) on the Breakin’ soundtrack, a gift from Debbie’s half-brother Ronnie Polkingharn, who was close to him and later became a musical mentor to him.

After spending three years in ninth grade due to truancy and poor grades, he dropped out of Lincoln High School at age 17. At age 14, Eminem began rapping with high-school friend Mike Ruby; they adopted the names “Manix” and “M&M”, the latter of which stood for his initials and evolved into “Eminem”.

In addition to his solo career, Eminem was a member of the hip hop group D12. He is also known for collaborations with fellow Detroit-based rapper Royce da 5’9″; the two are collectively known as Bad Meets Evil. His next two releases The Marshall Mathers LP (2000) and The Eminem Show (2002) were worldwide successes and were both nominated for the Grammy Award for Album of the Year. He returned to the music industry five years later with the release of Relapse (2009), and Recovery was released the following year; both albums won Grammy Awards for Best Rap Album. Recovery was the best-selling album worldwide of 2010, making it Eminem’s second album, after The Eminem Show in 2002, to be the best-selling album of the year worldwide.

Eminem is widely considered one of the greatest hip-hop artists of all time. He was 83rd on Rolling Stone‘s 100 Greatest Artists of All Time and 79th on the VH1 100 Greatest Artists of All Time lists. In August 2011, Eminem was called the King of Hip-Hop by Rolling Stone, which analyzed album sales, R&B, hip-hop and rap chart positions, YouTube views, social media, concert grosses, industry awards and critical ratings of solo rappers who released music from 2009 to the first half of 2011.

Is Eminem single or married? Who is Eminem dating now?

Eminem was married twice to Kimberly Anne “Kim” Scott. He began an on-and-off relationship with Kim in 1989.Their daughter Hailie was born on December 25, 1995. The two were married in 1999 and divorced in 2001. Hailie is the biological daughter of Eminem from his wife Kimberly. Eminem legally adopted Whitney Scott Mathers and Alaina,  Kim’s daughter from another relationship. He always mentioned his daughters in his songs. Eminem is usually praised for having a soft side when it comes to his private life, despite the fact that he comes across as an arrogant artist in almost all his music videos. Eminem expresses his love when it comes to his daughters.

As of 2020, Eminem’s net worth is roughly $230 million dollars, putting him high up on the list of richest rappers of all time.