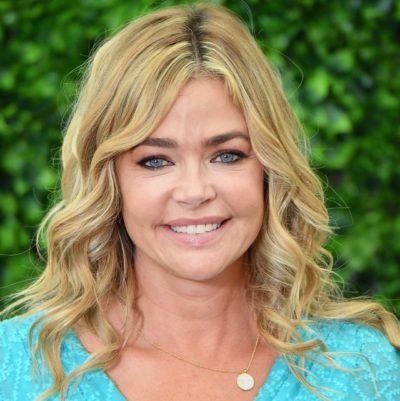 Denise Lee Richards is an American actress and a former fashion model. She has appeared in numerous films, including Starship Troopers (1997), Wild Things (1998) with Neve Campbell, Drop Dead Gorgeous (1999), The World Is Not Enough (1999) as Bond girl Christmas Jones, and in Valentine (2001). She played Monica and Ross Geller’s cousin on Friends (2001). From 2008 to 2009, she starred on the E! reality show Denise Richards: It’s Complicated. Between 2010 and 2011, she was a series regular on the comedy Blue Mountain State.

Denise Richards was born in Downers Grove, Illinois, to Joni, a coffee shop owner, and Irv Richards, a telephone engineer, whose father’s surname was Reichert. Her Croatian mother died of cancer in November 2007. She has a younger sister, Michelle. As a child, she was the “only girl on the baseball team”. In 1989, she graduated from El Camino High School. She was voted best looking in her high school yearbook. Richards was raised Roman Catholic. After her high school graduation, she began working as a model and traveled to cities such as Paris, New York, and Tokyo to do photo shoots and commercials.

In the 1990s, Richards appeared in several films and television shows such as Loaded Weapon 1 (1993), Tammy and the T-Rex (1994), Lookin’ Italian (1994). Her first starring role in a wide theatrical release was Starship Troopers in 1997 for which Richards was nominated for the Blockbuster Entertainment Award for Favorite Female Newcomer. The film grossed a total of $121.2 million worldwide.

Richards appeared on the 8th season of dance competition television series Dancing with the Stars, paired with Maksim Chmerkovskiy. She was the second contestant eliminated on March 24, 2009.

Richards is popular on social media and endorses products such as personalized cards, beauty products and wellness and skincare solutions on Instagram.

Richards has worked with Best Friends Animal Society on several projects, including its Pup My Ride program, which transports small dogs from high-kill animal shelters to other parts of the US where there’s a greater demand for small dogs. She has regularly appeared on Access Hollywood’s monthly pet segment showcasing shelter dogs rescued by Best Friends and available for adoption.

Richards became engaged to actor Charlie Sheen on December 26, 2001, and married him on June 15, 2002. They have two daughters together. They had divorced on November 30, 2006. in May 2013, Richards was awarded temporary custody of the twin sons born in 2009 to Sheen and his wife Brooke Mueller. In June 2011, Richards adopted a third daughter, Eloise Joni Richards, as a single parent.

n December 2017, Richards began dating Aaron Phypers. On September 8, 2018, Richards and Phypers got married in Malibu, California. In May 2019, Richards announced that Phypers is adopting her youngest daughter, Eloise.

Does Denise Richards have breast implants?