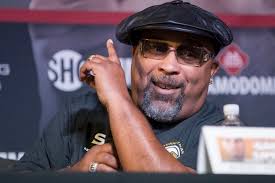 Who is Buddy McGirt?

Born on January 17, 1964, Buddy McGirt is an American former professional boxer and trainer who competed from 1982 to 1997 and working as a boxing trainer. He was a world champion in two weight classes, having held the IBF junior welterweight title in 1988, and the WBC and lineal welterweight titles from 1991 to 1993.

As a trainer, he has worked with multiple world champions, including Arturo Gatti, Antonio Tarver, Hasim Rahman, Paulie Malignaggi, and Sergey Kovalev. McGirt was named Trainer of the Year for 2002 by the Boxing Writers Association of America.

Buddy was born and raised in Brentwood, New York, U.S. His family information is not available right now. McGirt’s aspirations of becoming a professional boxer existed at a young age. He graduated from Brentwood High School.

He married Gina McGirt and the couple has 1 son James McGirt Jr and three daughters. For more updates, follow him on Instagram.