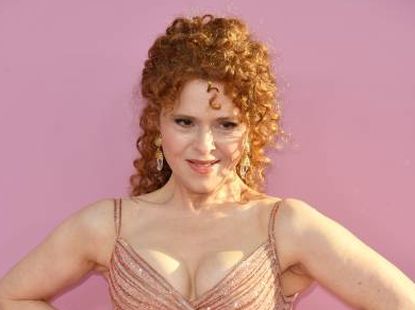 Bernadette Peters is an American actress, singer and children’s book author. Over the course of a career that has spanned five decades, she has starred in musical theatre, films and television, as well as performing in solo concerts and recordings. She is one of the most critically acclaimed Broadway performers, having received nominations for seven Tony Awards, winning two (plus an honorary award), and nine Drama Desk Awards, winning three. Four of the Broadway cast albums on which she has starred have won Grammy Awards.

Peters was born on February 28, 1948 into a Sicilian-American family in Ozone Park in the New York City borough of Queens, the youngest of three children. Her father, Peter Lazzara, drove a bread delivery truck, and her mother, Marguerite, started her in show business by putting her on the television show Juvenile Jury at the age of three and a half. Her siblings are casting director Donna DeSeta and Joseph Lazzara. She appeared on the television shows Name That Tune and several times on The Horn and Hardart Children’s Hour at age five.

Peters has appeared in 33 feature films or television movies beginning in 1973. Peters has recorded six solo albums and several singles. Three of her albums have been nominated for the Grammy Award.  Peters has been performing her solo concert in the United States and Canada for many years. She made her solo concert debut at Carnegie Hall in New York City in 1996, devoting the second half to the work of Stephen Sondheim.

Peters has received many honorary awards, including a star on the Hollywood Walk of Fame in 1987. She was named the Hasty Pudding Woman of the Year in 1987.

Is Bernadette Peters single or married?

Peters and Steve Martin began a romantic relationship in 1977 that lasted approximately four years. Peters married investment adviser Michael Wittenberg on July 20, 1996, at the Millbrook, New York, home of long-time friend Mary Tyler Moore. Wittenberg died at age 43 on September 26, 2005, in a helicopter crash in Montenegro while on a business trip.

How much is Bernadette Peters Worth?

Bernadette Peters is an American actress, singer, and author who has a net worth of $40 million.