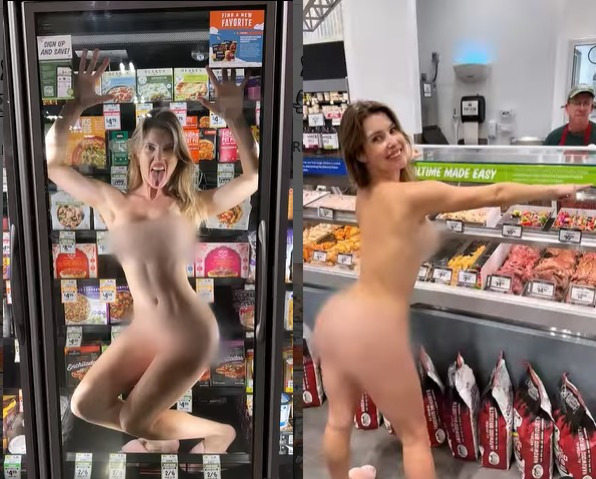 American influencer and Youtuber Amanda Cerny surely enjoys a massive fan following in India. She often interacts with her Indian fans by greeting them during Indian festivals and sharing content about hot topics in India. Recently also, Amanda has used her social media to draw the attention of everyone towards her.

Ranveer Singh and his recent controversial nude photoshoot have grabbed global attention as Jacqueline Fernandez’s doppelganger, model and social media influencer Amanda Cerny has stepped forward in support of the actor. Amanda has shown her support by following in Singh’s footsteps, yeah, by baring-it-all.

Amanda posted a reel on her Instagram, in which she busy shopping in a mall, and while browsing the phone, she suddenly realised something. She stripped down her clothes and posed naked at different corners of the shopping centre.

Ranveer Singh has been making headlines ever since he went nude for a magazine photoshoot. His photos went viral, netizens started criticising him on social media. Bollywood stars expressed their opinions on his controversial photoshoot.

After Alia Bhatt, Vidya Balan and other Bollywood celebrities came in support of the actor Ranveer Singh who courted controversy after he posed nude for a magazine cover and shared photos on social media, actor Janhvi Kapoor came up in support of the actor. Janhvi while speaking to the media at the launch of Reliance Digital in Delhi on Friday said, “I think it`s artistic freedom and I don`t think anyone should be analysed for artistic freedom.”