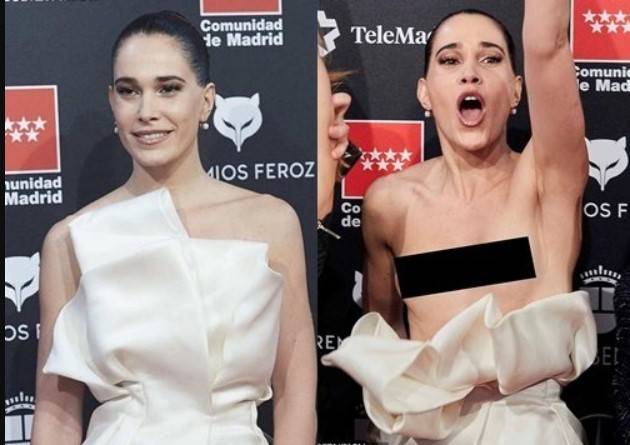 On Thursday night in Madrid, Celia Freijeiro made an unfortunate fashion faux pas while walking the red carpet for the Feroz Awards. When the Spanish actress and the cast of Vida Perfecta gathered to celebrate her win for Best Comedian TV Show, her strapless ivory dress entirely collapsed.

In the floor-length pleated gown with a daring thigh-high split, Celia, 36, wore no bra. Throughout the ceremony, the TV personality seemed to struggle with the dress slipping down.
Clelia grabbed onto her dress as she danced with the group, then raised her hands in the air, causing the dress to fall.

The Spanish Cinematographic Informers Association established the Feroz Awards in November 2013 as a Spanish-based film prize. Given that they precede the Goya Awards, which are given by the Spanish Film Academy, they are regarded as the Golden Globes of Spain.

The inaugural event happened in January 2014. For the fourth iteration, which took place in 2017, new categories honoring excellence in television were introduced. The night’s biggest winner was Pain and Glory. Antonio Banderas received Best Actor and Best Supporting Actress for the movie, along with Best Drama, Best Screenplay, and Best Director. Seventeen and Litus lost to Benefits of Traveling by Train in the Best Comedy Film category.