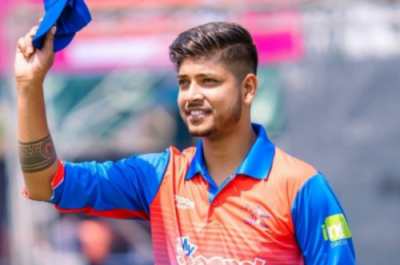 Who is Sandeep Lamichhane?

Born on 2 August 2000, Sandeep Lamichhane is a Nepalese cricketer who formerly captained the Nepalese national team, before being suspended from the national team in September 2022.

A right-arm leg spin bowler, Lamichhane has played for Twenty20 franchise sides across the world, including the Delhi Capitals in the Indian Premier League (IPL), the Hobart Hurricanes in the Big Bash League (BBL), and the Lahore Qalandars in the Pakistan Super League (PSL). He is also Nepal’s all-time highest wicket-taker in both ODI & T20I.

Lamichhane is also a singer. He uploads his songs and music videos on his YouTube channel. In July 2018, Lamichhane released his first song Udash thiyo from the album Pratikshya-the waiting.

Lamichhane was in Aruchaur, Syangja, Gandaki Province. During his childhood, he considered Sachin Tendulkar and Shane Warne as his cricketing idols.Then he moved to the Chitwan district and started training at Chitwan Cricket Academy which is run by former captain Raju Khadka. During a visit by the captain Paras Khadka and coach of Nepal Pubudu Dasanayake, Sandeep was told to bowl in the nets and was selected for the national under-19 training camp.

A police complaint was filed by a 17-year-old girl, on 6 September 2022, accusing Lamichhane of raping her on the night of 21 August in a hotel room in Kathmandu. Police have said the CCTV footage of the hotel shows that Lamichhane was with the girl. On 8 September, Kathmandu District Court authorized the police to arrest Lamichhane for further investigation. Consequently, Nepal’s cricket governing body, the Cricket Association of Nepal (CAN) suspended Lamichhane from the national team.

previousKarishma Tanna sets hearts racing as she chills in the pool in a green bikini
nextShama Sikander heats up the internet in a pink nightgown and shows off major cleavage, See Pics