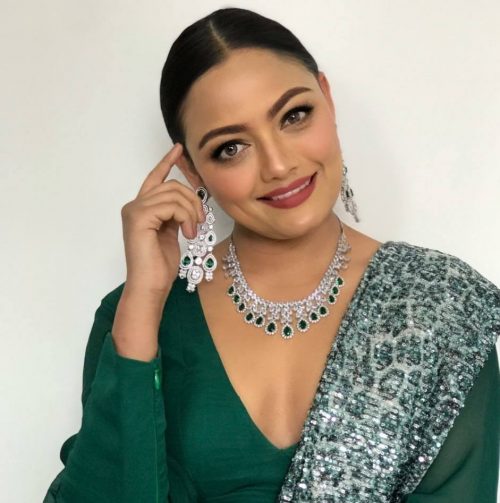 Born on  17 July 1987, Reecha Sharma is a National Award-winning Nepalese actress, model, and VJ, and she is one of the judges for Comedy Champion (season 1 and 2). She was one of the ten semifinalists of the Miss Nepal 2007  pageant and has been popular for her acting in music videos and ramps. She made her acting debut in the Nepali film First Love (2010). She then acted in Mero Love Story and Highway in 2011. The most successful box office movie of 2012 Loot marked a turning point in her acting career. She also acted in a youth-focused movie Visa Girl in 2012. She also acted in the critically acclaimed 2014 film Talakjung vs Tulke.

Reecha did her acting diploma from Mr. Jack Walterz’s. Constantly in search of good contemporary stories, potent with political awareness, she has recently forayed into production as well. Sharma has acted in 17 movies, two of which she produced herself.

Sharma was born in Dhangadhi, Nepal. She was raised in the Kailali district. She now lives in Kathmandu. Her parent information is not available right now. She completed her schooling and decided to study business studies. After plus two in the business study, she finished her bachelor’s degree in commerce.

Reecha has been popular for her acting in music videos and ramps. Richa’s first facing of camera was in an Alok Nembang music video on Yash Kumar’s voice. Richa also worked as the host of television shows ‘Music of Your Choice’ and ‘Top Ten’ in Image Channel and another show, ‘Superstar’ in Nepal Television.

Reecha married Deepeksha Bikram Rana in December 2019 in Kathmandu. The actress was in a relationship with Rana for two years. He is the General Manager of Lalitpur-based Labim Mall. She has given birth to a baby boy on 09 September 2021.