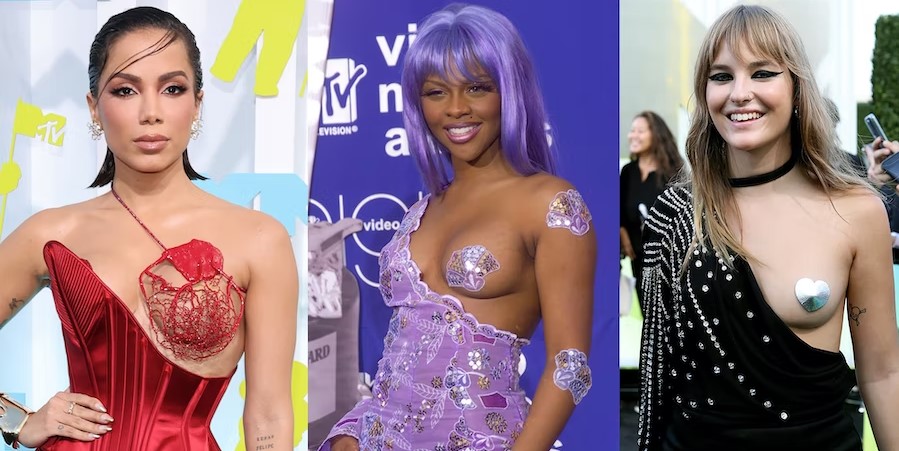 It was back in 1999 when Lil Kim made waves at that year’s MTV Video and Music Awards by stepping out in a one-shoulder lavender jumpsuit and matching clamshell-shaped ni*ple pasty. (And if you’re already assuming that prudish viewers were the only ones left stunned by the latter element of her ensemble, it was none other than Diana Ross who couldn’t help but reach out and touch it onstage.) Twenty-three years later, the look remains fresh on the minds of fellow VMA attendees looking to turn heads. It took just about 15 minutes into the arrivals to Sunday night’s ceremony at the Prudential Center in Newark, New Jersey for two to give the icon her sartorial due—and they just so happen to both be relatively newly familiar names to Americans who have yet to forget one of Kim’s stylist Misa Hylton’s most genius moments.

First up, Anitta hit the red carpet in a blood-red ensemble that came courtesy of Schiaparelli’s Daniel Roseberry. The 29-year-old Brazilian mega-pop star told W that she’s been on the hunt for unexpected ways to be sexy earlier this year, and it seems like her quest is going swimmingly. And while a nod to such an iconic VMAs moment may seem par for the course, Anitta simultaneously delivered a surprise rare couture moment at the annual ceremony.

previousRhea Chakraborty for her pictures in a shimmery bikini top, Check out it!
nextThe French actress Marion Cotillard was caught na*ed by photographers