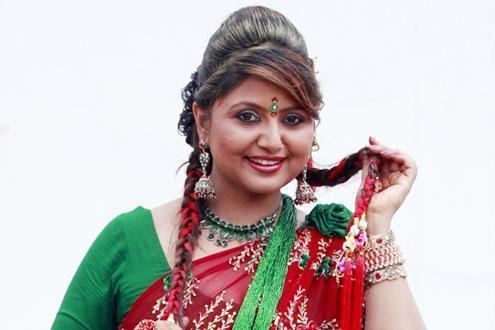 Deepa Shree Niraula is Nepalese actress, comedian, and radio personality best known for her role in the Nepali television serial Tito Satya. She was born on 23 August, 1975 at Biratnagar from father Tulsi Prasad Niraula and mother Gita Devi Niraula. She gained prominence among the Nepali audience after her well-known role of Dhaniya in the radio show Dhaniya ko Duniya. She is the director of one of the highest grossing Nepali comedy film Chhakka Panja.  After the success of ‘Chhakka Panja’, Deepa has also established herself as a successful director in Nepali cinema industry. Before this film project, Deepak and Deepa together with another comedian Nirmal Sharma aka Gainda had produced two superhit comedy movies ‘Woda Number 6’ and ‘Chha Ekan Chha’.

After the grand success of ‘Chhakka Panja’ & Chhakka Panja 2′, the post production of Deepa directed third sequel movie ‘Chhakka Panja 3’ ,  Cha Maya Chapakkai in 2019. All the movies did good in box office collection.

Deepa started her acting career through Tharu Cinema, working as lead role in Hatai Kuhira, which is filmed in Tharu languages. Then she made her first debut in Nepali cinema and television serial Tito Satya.

Deepa has travelled to many foreign countries for stage programs. Some of the countries in which she has performed include USA, UK, Malaysia and various countries of Europe and Middle East.

She is also working with Jitu Nepal on a comedy show “mundre ko comedy club”.

Although she has completed her 30s and entered in 40s, Deepa hasn’t married yet. She is rumoured to be in affair with Actor Deepak Raj Giri, they both deny such relationship. Deepak is married and is father of two grown up sons and a daughter.

Deep Shree Niraula Net Worth in 2020

Deepa and Dipak team produced Chha Ekan Chha and Chhakka Panja Movie Series. Chakka Panja is the movie which became commercially successful and became highest-grossing Nepali film. Deepa Shree Niraula’s total net worth is estimated to around 3-8 crores. Beside, she is the owner of Kingsway Cafe.