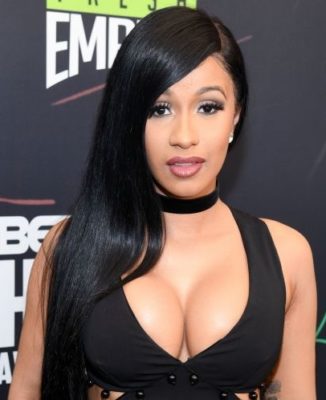 Belcalis Marlenis Almánzar, known professionally as Cardi B, is an American rapper, songwriter, television personality, and actress. She became an internet celebrity after several of her posts and videos became popular on Vine and Instagram. From 2015 to 2017, she appeared as a regular cast member on the VH1 reality television series Love & Hip Hop: New York to follow her music aspirations, and released two mixtapes—Gangsta Bitch Music, Vol. 1 and Vol. 2, before signing with label Atlantic Records in early 2017.

Cardi B was born on October 11, 1992, in Washington Heights, Manhattan. She is the daughter of a Dominican father and  Trinidadian and Spanish mother. Cardi B’s younger sister, Hennessy Carolina, also has a strong following on social media and has accompanied her to award shows, such as the 2017 Grammy Awards. She was raised in the Highbridge neighborhood of the South Bronx.

She went on to attend Renaissance High School for Musical Theater & Technology, a vocational high school on the Herbert H. Lehman High School campus. She attended Borough of Manhattan Community College before eventually dropping out.  While stripping, Cardi B lied to her mother by telling her she was making money babysitting.

As of early 2017, Cardi B began publicly dating fellow American rapper Offset, of the southern hip hop group Migos. Cardi B and Offset became engaged on October 27. On April 7, 2018, Cardi B revealed that she was pregnant with Offset’s child. In July 2018, Cardi B gave birth to her first child, a daughter named Kulture Kiari Cephus.

Cardi B Age / Net Worth / Income

Before fame, Cardi was an exotic dancer at a strip club. In 2013, Cardi B began to gain publicity due to several of her videos spreading virally on social media, on Vine and her official Instagram page.

Facts / Controversy you did not know