Anushka Sharma shares pics in an orange swimsuit as she clicks herself on vacation, See Pics 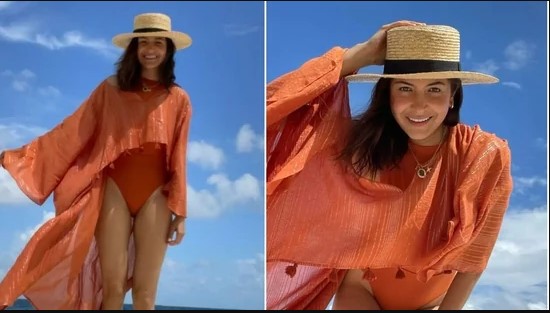 Anushka Sharma treated her followers with a glimpse of her vacay with Virat Kohli and Vamika. Sporting a tangerine monokini and sarong, the actress posed on the beach at a popular beach destination. Sporting a hat and her signature neckpiece, Anushka posed in front of a camera set up on the beach. “The result of taking your own photos,” she captioned the clicks which were absolutely stunning.

Sharing the photos, Anushka wrote in the caption, “The result of taking your own photos.” She is seen in an orange swimsuit with an attached shrug, and a hat. The first pic shows her bending down to pose for the camera which was on auto-shoot mode. The second is a long blurred shot of her standing on the beach.

Before taking off for her summer vacation, Anushka was seen sweating it out on the field for her upcoming movie ‘Chakda Xpress’. She essays the lead in this movie, which is based on the life of cricketer Jhulan Goswami.