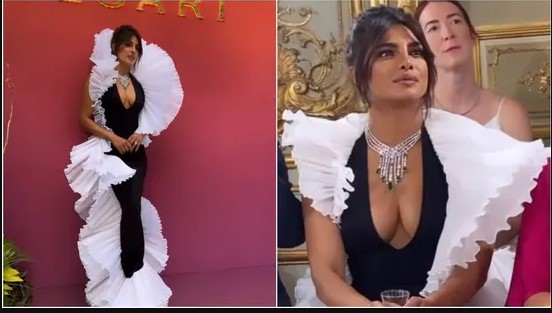 Priyanka Chopra, who was recently announced as one of the four new brand ambassadors for Bulgari, attended an event for the jewelry brand in Paris on Tuesday. Priyanka Chopra made a stunning appearance in a black-and-white gown at an event for Bulgari in Paris. The other three are Hollywood stars Anne Hathaway and Zendaya and K-Pop star, BLACKPINK’s Lisa.

Priyanka was wearing an outfit by London-based designer Robert Wun who took to Instagram to share pictures and videos of her appearance. Law Roach who styled her also shared a video of her posing upon her arrival at the event. Actor Jameela Jamil was among those who reacted to the post. She wrote, “I gasped,” adding a red heart emoji. Jewelry designer Lucia Silvestri also shared a video of Priyanka intently watching the ramp walk, and gasping a ‘wow.’

previousNeha Sharma turns up the heat in her latest black and white sultry photos, See Pics
nextUrfi Javed wears a seashell bikini top and a see-through sarong in her latest video