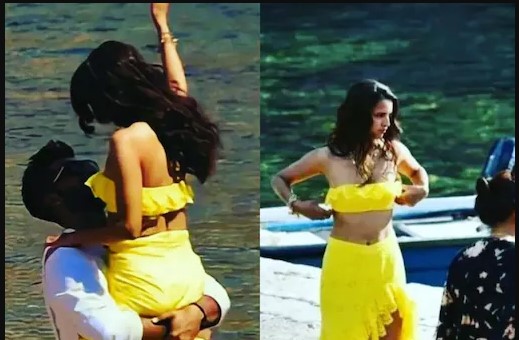 Vicky Kaushal and Tripti Dimri are currently in Croatia along with Farah Khan to shoot a romantic song for their upcoming film.
While they have been treating their fans with some lovely pictures from the exotic location, a few clicks from the song shoot have leaked from the set and have gone viral on social media.

Apart from Vicky and Tripti, the Anand Tiwari’s directorial also features Punjabi singer-turned-actor, Ammy Virk, in a prominent role. Meanwhile, on the professional front, Vicky is jam-packed with interesting projects. Next, the actor will be seen sharing the screen space with Bhumi Pednekar and Kiara Advani in Govinda Naam Mera. Apart from this, Vicky will also be featured in Meghna Gulzar’s much anticipated Sam Bahadur, which will be depicting the life of Field Marshal Sam Manekshaw.

previousDisha Patani’s latest pics in a red bikini will leave you gasping for air! See Pics
nextAnushka Sharma shares photos in a black monokini from her Maldives vacation